There’s a new adventuring party on the block who are determined to defeat the demon king – and they show as much promise as they do skin! This oddball band of merry women is made up of Paladin, who determines her worth by sacrificing herself in battle, Dark Elf, whose pride in her origins puts them in the most trouble, Mage, who seems unfortunately caught up in this mess, and Fighter, the only one who seems remotely bothered by the skimpy armour sets doled out to female adventurers. But before they can get close to the demon king, they have to complete some irritating lower-rank quests. And to make matters worse, after overcoming financial instability by breaking into civilian houses and run-ins with kings who think their services are worth less than a night in an inn, it becomes apparent that monsters aren’t their only foe in this fantasy world! So the one question remains, can they maintain their sanity long enough to even meet the demon king?

A number of the show’s more fanservice-oriented scenes feature sexual moaning (like a bondage scene in an early episode and some monster attacks trigger this also), one character is obsessed with sacrificing herself to heinous villains and imagining what sexually devious acts they’ll perform on her (all while being stared at concernedly by her teammates), and some villains and monsters are quite creepy and perverted. All of these references are played either for comedy or fanservice and are not taken too seriously.

A couple of episodes in the main series parody the tentacle obsession, thus showing some fairly sexual scenes with appendages. These scenes are portrayed more as parody and fanservice than anything else. Same can be said of some of the bondage-style torture featured in another episode.

However, it is the OVAs* that have earned the ‘Moderate’ description. Mostly for some depictions of lesbian sex during a couple of episodes. While these are rather intended to be comically inappropriate, they are still some rather risqué scenes.

Normally, if there is strong sexualised nudity in one episode, I’d blanket the whole series with that warning. However, since the OVAs* that contain the more extreme content aren’t available in the west, I feel it more appropriate to give the mild description, too.

While the series itself bathes in fanservice, there is no nipple detail or genitalia present in the main twelve-episode series…

…the OVA* series on the other hand contains nipple detail and smoothed-over genitals (as seen in Dogma).

Some episodes focus on fights with monsters and even some between other characters, but none depict blood or anything particularly extravagant. They are either played for comedy, build up to a punchline, or played for fanservice. 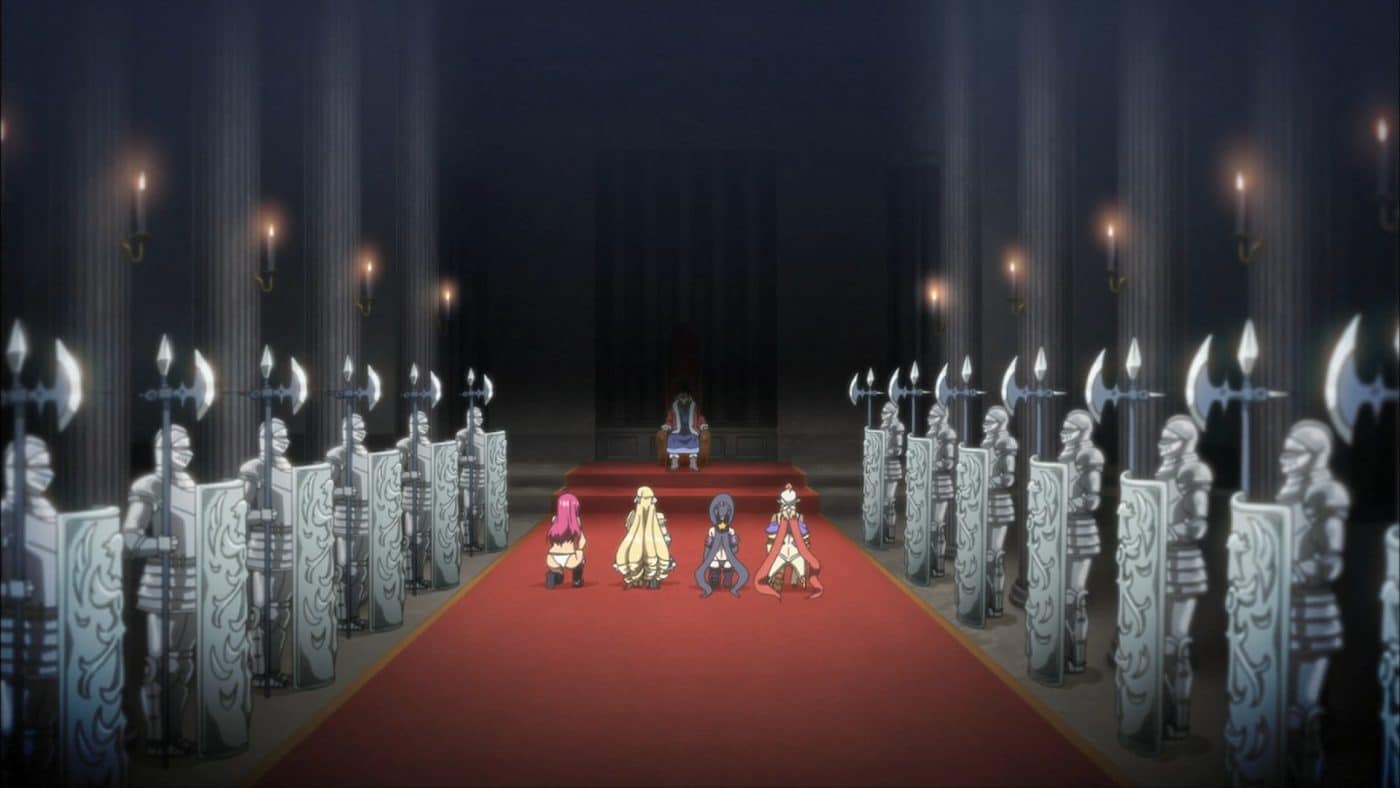 This is a show that appeals to fans of old-school Japanese Role-Playing Games (JRPGs). It rips into some of the tropes and questions a number of the mechanics, systems and worlds these games built. It’s the kind of show that hopes to make the viewer think ‘oh yeah, that is pretty weird…’ or ‘thank goodness, I’m not the only one who had that experience!’ I mean, even the ‘Bikini Warriors’ title is poking fun at the skimpy armour design of female characters in JRPGs.

Fanservice fans (might) rejoice as this series is drowning in the stuff. Every four-minute episode features at least some of it – and the OVAs* have it coming out the wazoo!

If you never played a classic JRPG or are unaware of any of their tropes and mechanics, then this show will probably fly over your head. Its comedy is completely geared towards these players.

As much as fanservice is a selling point for some, it’s the bane of entertainment for others. If you don’t like fanservice, then this show may not be for you, considering how much of it there is! 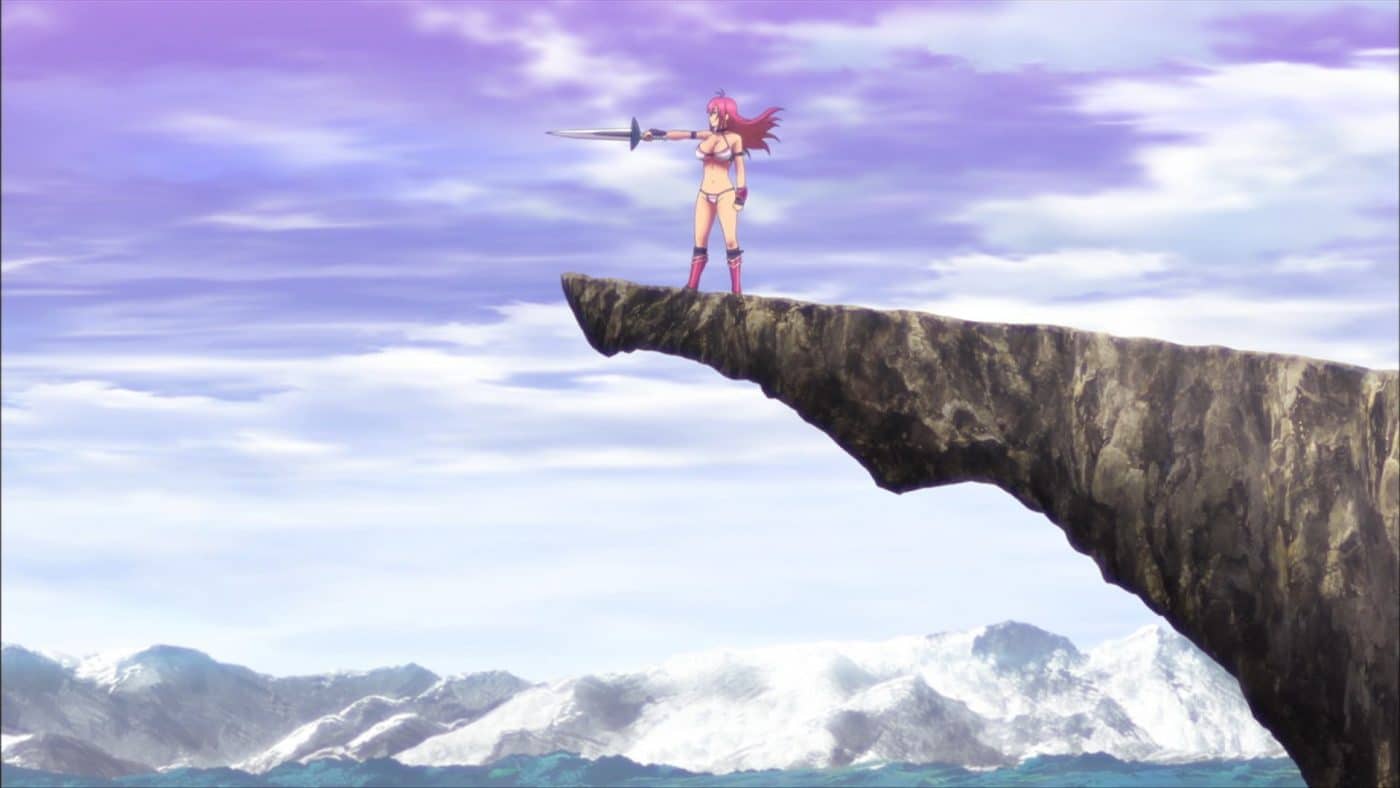 Altogether, the main series (excluding OVAs*, that is) is 48 minutes, with each episode being four minutes.

The OVAs* are not available in any western releases (as of 19/09/2019) and there is no UK version available either (as of the same date). The American release is Blu-Ray Region A and DVD Region 1 NTSC, so alternative measures will have to be taken in order for it to be played in the UK.