Urban legends take on the game world of their dreams

No Game No Life

The film No Game No Life Zero is a prequel made after this series had already aired. However, they can be watched in any order. A few references to this series exist, but they are more like easter eggs for original viewers. Under normal circumstances, I’d tie this entry in with the prequel film’s entry, but I’ve separated this page because of how different the productions are in terms of themes and style (i.e. this series having a larger fun factor compared to the film’s seriousness and weight).

Together, shut-ins and siblings Sora and Shiro form the urban legend known as ‘blank’ – an undefeated player at the top of every game’s leaderboard who leaves their name blank. Unfortunately, their unparalleled skill and fear of the outside world has led them to become bored. That is, until Tet, the god of play, invites them to join his world of Disboard. Be it wars, arguments or even royal heirs, there everything is determined by games. Launched into their dream world, the two quickly find themselves capable of becoming the rulers of Imanity, a race bearing no magic and nearly no land. Together with the previous king’s daughter, the two embark on a quest to bring Imanity to glory and challenge the god who sent them there. 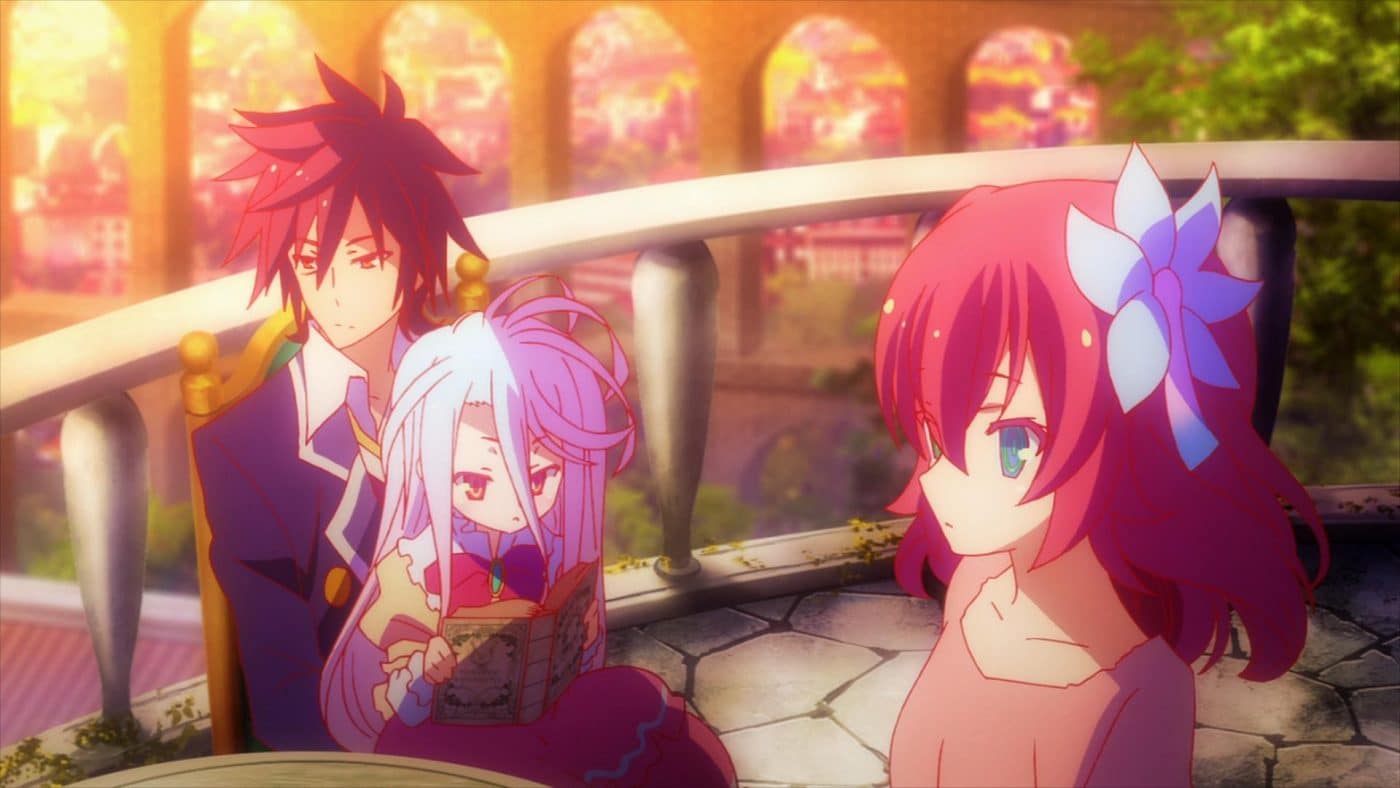 This occurs pretty frequently for the duration of the show, from panty shots to bath scenes. However, all detailed nudity is covered with steam or censored in other ways. The censorship is sometimes a subject the characters themselves make fun of!

Mostly, it’s Sora making references to his virginity, his fetish for animal girls and pornography.

There really aren’t many of these scenes, but when they occur, they only show a small blood spatter following a strike.

For veteran anime fans, this is a unique art style to enjoy. The psychedelic colours, red lines and abundance of pink make this show visually unique. Other shows have dabbled in the colouring and more shows have delved into the use of red lines, but neither tend to be as present as they are here. That goes for the character designs, too.

Gamers will certainly get a kick out of this one. A number of references are strewn across the series to existing video games and to iconic lines of dialogue within them, such as the infamous ‘I used to be an adventurer like you…’ quote from The Elder Scrolls V: Skyrim.

Similarly to Prison School (though infinitely less raunchy) this show portrays the main characters’ main strength as their intelligence, strategy and ability to think outside the box. In those fields, it would be no understatement to call them overpowered protagonists. They win each game by using these traits; interactions that might seem pointless at the time often turn out to be literal game-changers further down the line.

Some viewers may find the series too high energy or insane.

Viewers may be put off by the fan-service surrounding Shiro, considering she’s eleven, some viewers may find it uncomfortable. It should be noted, though, that the show itself is quite self-aware of this and often makes fun of itself for it.

Despite its focus being on card games and board games, there are a number of references to video games, so a general knowledge is recommended for full entertainment. However, it’s not necessary. 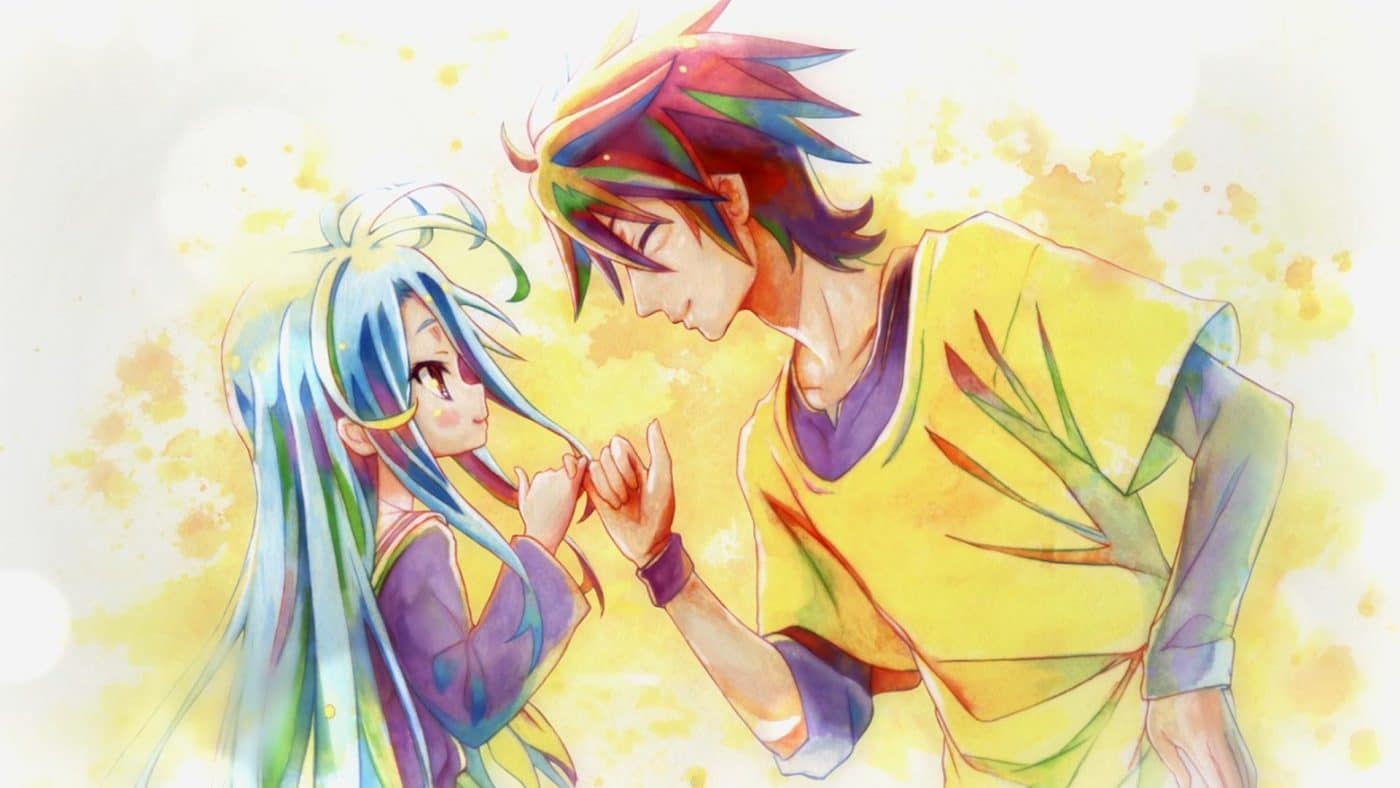 The commentaries featured are character commentaries, and thus are scripted and don’t give much behind-the-scenes info except for mentioning the author’s nationality. Of course, if that’s your thing, then there are plenty of them to enjoy.

The composer here is credited as SuperSweep because it was a collaboration of a number of its members. SuperSweep is a company owned by composer Shinji Hosoe (who was one of the composers on this series, too) but he is not the only one involved here. Some tracks are composed exclusively by one member, others are composed by varying combinations of them. Since SuperSweep are often credited as the composers, anyway (followed by the list of those involved) I took the liberty of using that to my advantage.

For Your Anime Dictionary:

*Isekai is a subgenre which involves the protagonist being transported or reincarnated (or however the author decides to bring them to) another world – usually a parallel one with magic and the like. Oftentimes, the main character is overpowered in some way (or all ways).