After being caught in the middle of a desperate peeping operation, the first five male students in a co-ed school are exposed to the establishment’s unusual punishment system. Rather than be expelled, the students have been allowed to serve time as prisoners where their sins will be forgiven if they can keep out of trouble for long enough. Except, it would seem that on the day they were arrested, Kiyoshi found a girl he’s interested in who seems interested in him as well. In order to fulfil the promises he made to her, he might just have to break a few rules. Good job he’s not the only one who wants to breakout… 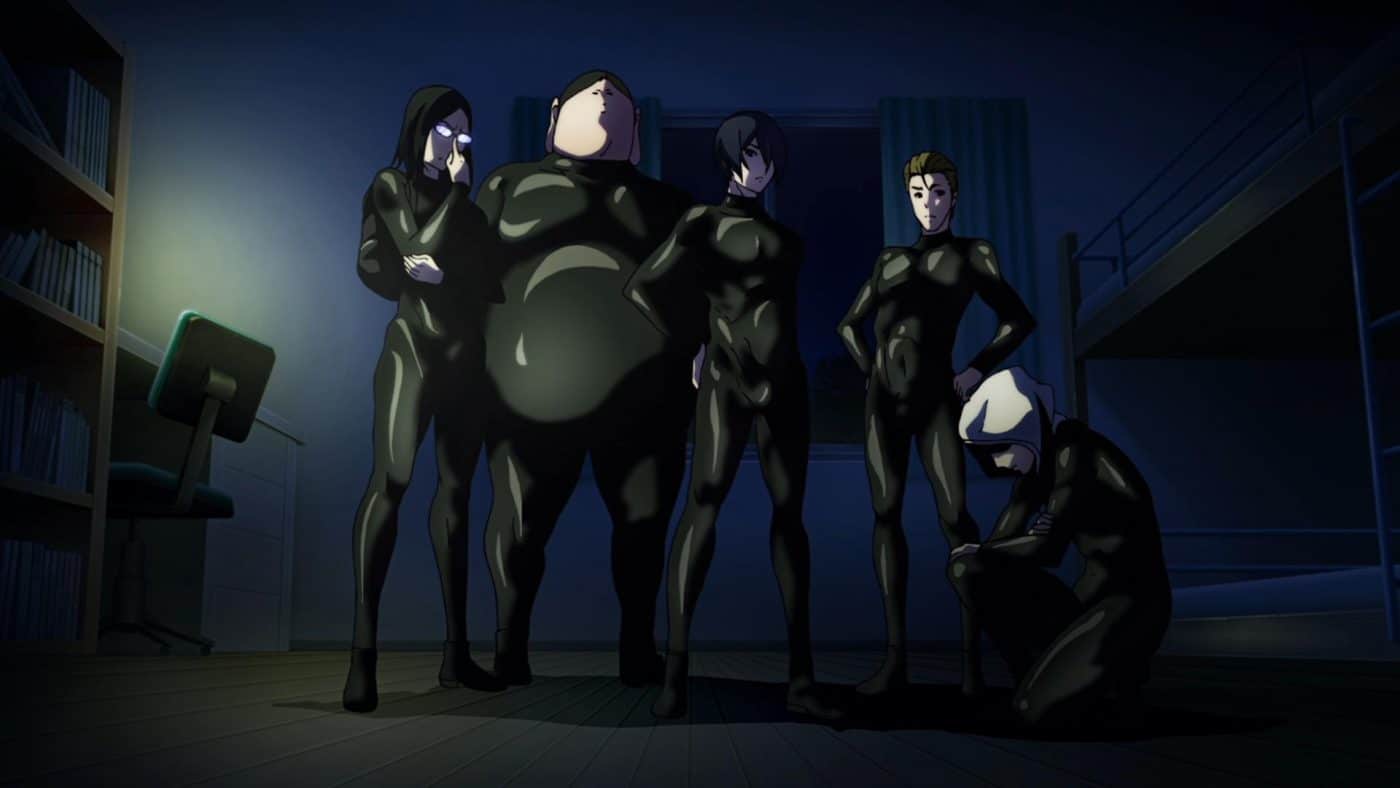 This is not a comprehensive list of every individual use of strong content, merely a guide to show you how extreme it gets and how strong it tends to be. Also, the tags I’ve given each segment (e.g. Very Strong Language) is based on my own system and does not necessarily reflect the tags the BBFC (or other national equivalent) use. I have found that the BBFC tend to be quite vague and inconsistent in their tags. As an example of vagueness, ‘Moderate Nudity’ has meant that there are only a few scenes depicted, but they have breast detail. However, it has also been used to refer to a series that has lots of nudity that is very tame. According to my system, the ‘Mild’, ‘Moderate’, ‘Strong’ and ‘Very Strong’ adjectives are based on strength, not on volume. Now, obviously, the strength of any type of content is subjective; what I consider strong might just be a relaxing weekend for you. Hence, I have added an explanation for my decision to allow you to make your own informed decision.

Perhaps surprisingly, this show is mostly cleavage, panty-shots and the odd male arse on certain comical scenes. That being said, there are still a fair few scenes with breast detail (i.e. nipples). This is particularly prominent in the first episode, where a whole washroom of women can be seen walking around with their waps out.

One very brief scene where full nudity can be seen on the chairman’s computer. Naturally, the model’s genitals are pixilated in true Japanese fashion. However, that kind of content is rather rare (and by that, I mean extraordinarily rare) for a non-hentai** anime. It’s far more common for the anime to simply leave the genitals blank and smoothed over like something straight out of ‘Dogma’. So if you’re looking for extreme fan-service, this show has you covered (and by that, I mean it doesn’t cover anything!).

One scene implies a golden shower and shows the drenched recipient afterwards.

The chairman makes very clear his ass fetish, with one episode featuring a monologue about the superiority of buttocks over breasts.

One scene which features face-sitting – though both characters are fully clothed. I didn’t really know where to put this, but I suppose it sort of counts as a form of sex…right?

Some episodes depict out-of-context scenes that appear to us to be of a strong sexual nature. They still lack any exposed genitalia.

Typically, for the comical use Prison School has for its bloody violence (i.e. slapstick), I would give it a ‘Mild’ tag. However, for the fact that the blood and violence is turned up much higher than most series, I feel I should give it a greater warning. 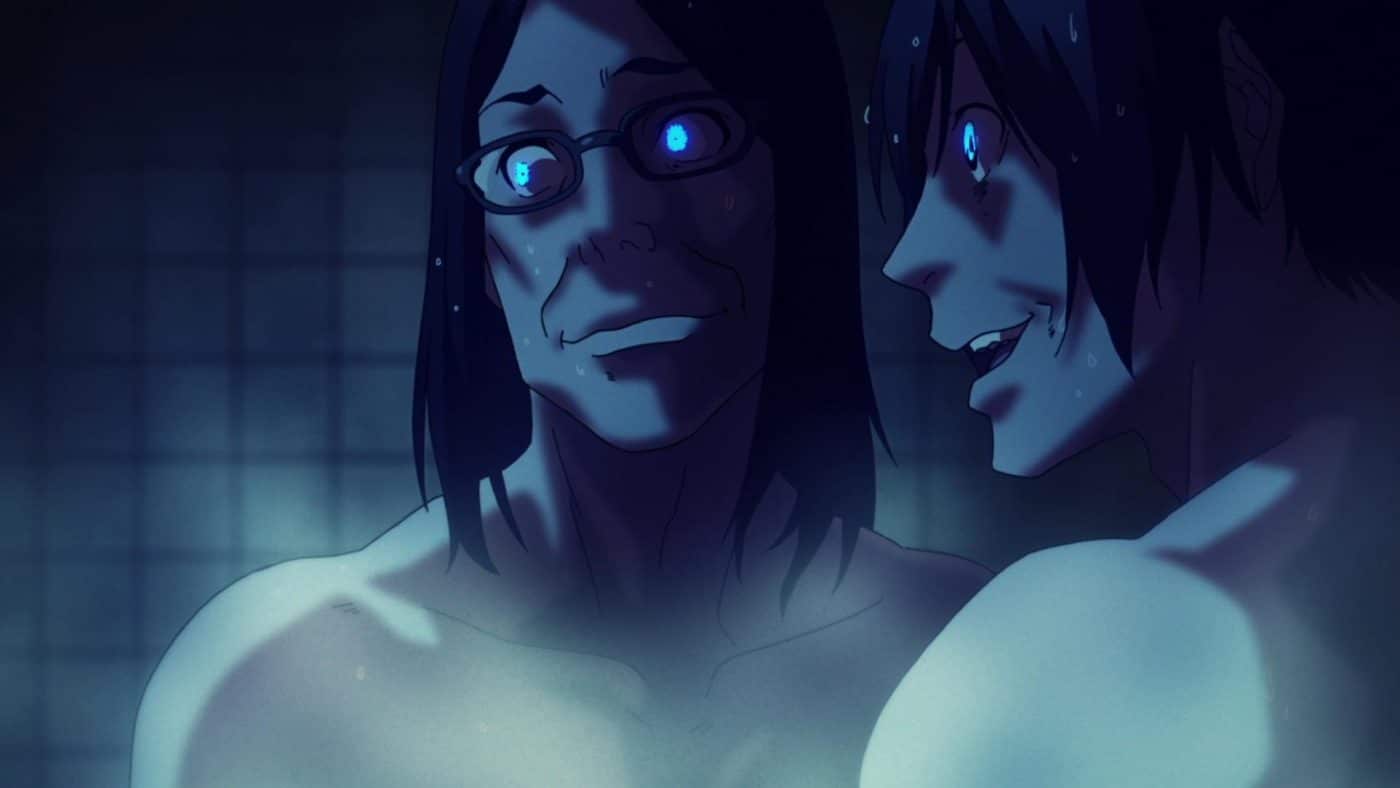 This show is surprisingly intelligent at times. It might not be a thought-provoking series for the philosophy nuts out there, but it builds much of its fun on the strategies the boys devise to breakout and escape punishment. Lots of seemingly pointless or unusual pre-planning that later comes into play as their cause of victory. For those who enjoy strategic series, this may be a swaying factor.

Those who’ve seen a lot of anime will likely acknowledge the unique character designs that appear here. So, if you only care about getting a unique artistic experience, this has that.

Most importantly, this series provides extreme comedy to an extent that isn’t found in most anime. Dark comedy, gross-out comedy, sex jokes, inventive insults, slapstick comedy with a crunch, out-of-context situations that are wonderfully misunderstood, etc. If you love your extreme comedy, this has it all.

No matter which way you slice it, this series will not appeal to anyone who does not like gross-out humour or dark comedy. There’s a hefty amount of sex jokes, sexual humour and extreme fan-service to add to its even greater heap of potentially objectionable content.

As far as the dub is concerned, I’ve noticed that some people are put off by Sonny Strait’s voice for Andre. His pinched-nose, Gollum/Smeagol-like voice might go against some viewers’ expectations – though I actually found it to be an unexpectedly good fit for the character!

Directors often bring me to a series, though Tsutomu Mizushima himself didn’t bring me to this show in this case. I only found out afterwards about his involvement in other series I’ve seen (such as P.A. Works’ ‘Another’ series). Rather, what brought me to this series was the unique character designs and the promise of dark comedy and gross-out humour. Despite those promises, the deciding factor for watching the show was actually one of the English Dub’s two script writers. It’s all well and good for a series to have dark comedy and gross-out humour, but if the script is bad, then it’s all for naught. I have found that English Dubs often birth some of their best scripts from extreme shows like this. Sure, I probably would have watched the show eventually, regardless (maybe in Japanese, too). However, when it comes to English Dubs, there is one name that bumps a series from the bottom of my list to my definitive next-up: Jamie Marchi. She has scripted for some of the funniest English Dubs around (though she also does tremendous work on more serious works, for which she is grossly under appreciated), so when I learned of her involvement, this became a must-watch. After her work on GAINAX’s ‘Panty & Stocking with Garterbelt’, it’s hard not to have high expectations for another dark/gross-out comedy written in part by her!

‘The Prison Boys’ group credited as the performers of the Opening and Ending themes is made up of the Japanese voice actors of the main characters (i.e. the prison boys). What that means is that if they become your favourite artist, I’m afraid you won’t be getting another song from them unless either a character song cd is released (which hasn’t happened yet) or they perform for the announced second season.

It’s also worth noting that the name ‘The Prison Boys’ is actually the name under which FUNimation’s English credits credit them. Officially speaking, they are called ‘Kangoku Danshi’.

Ai no Prison by The Prison Boys

Things To Listen For

Director Tsutomu Mizushima declared that he wanted Prison School to be a ‘serious comedy’, so listen out for the unusually serious music and sound effects (well…except for a specific one lovingly referred to by Mister Mizushima as the ‘poop mp3’).

One line in Episode 7 was redubbed on the physical release due to the backlash it received.

The OVA episode is not featured on either of FUNimation’s combo-pack, Madman’s DVD or either of Anime Limited’s (AKA All The Anime’s) Blu-Ray releases. Do not despair, though, for you won’t miss out on a lot. Although the episode is of a similar quality to the preceding series, the OVA merely expands on the ending (i.e. the romances) depicted before the epilogue of Episode 12. As such, you wouldn’t be missing any crucial story if you don’t watch it. If you want to watch it, Madman’s Blu-Ray release is listed on their website with ’13 Episodes’, so it may be available there (but I should add that this comment needs confirmation as I have only checked the website, not the release itself).

The commentaries (and other features) featured on the physical releases may be limited to the Blu-Ray discs which is not a problem if you purchased either of Anime Limited’s as there are only Blu-Ray releases available. FUNimation often limit (more so in recent years) the special features to the Blu-Ray discs, and therefore cause most versions based on theirs (like the Australian and UK) to limit the special features in the same way. To my understanding, this feature is usually kept in Australian and UK releases because it’s cheaper for the publishers than mastering a DVD version of the special features in an age that is gradually pushing DVD out. (Again, that’s just speculation on my part.)

During a commentary featured on the Blu-Ray, the American voice actors revealed that FUNimation reminded them they could adopt pseudonyms for the show to credit them under due to the show’s hefty load of objectionable – and slightly pornographic – content. However, they mentioned rejecting the offer when they found how enjoyable the show actually was.

In an interview with Tsutomu Mizushima, the director mentioned trying to make Prison School a ‘serious comedy’. He told the staff he didn’t want them using any comical sound effects nor did he want the composer to write comical music. That’s right, he wanted everyone to be dead serious for ‘Prison School’!

*Ecchi is anime’s version of softcore pornography. Though sex scenes and even pixilated genitalia can be present, it’s rare (particularly in the genitalia department). It’s much more common for Ecchi anime to contain less explicit detail.