Heartbroken high schoolers turn each other into replacements of their crushes

High Schooler Hanabi Yasuraoka is completely head-over-heels for her homeroom teacher and childhood friend Mr. Kanai; Classmate Mugi Awaya is completely head-over-heels for his music teacher and previous private tutor Miss Minagawa. However, when the two find out that their crushes have fallen for each other, the two heartbroken students enter into a temporary relationship to deal with their loneliness and need for physical contact. As the two explore their relationship of replacement and lies, Hanabi learns about the hidden feelings of those around her, the true nature of the woman she’s lost to and even what it’s like to be on the other side of a one-sided crush. And she’s not the only one. The road of deceit, using and moving on that’s ahead of her will teach her just the kind of person that she is. 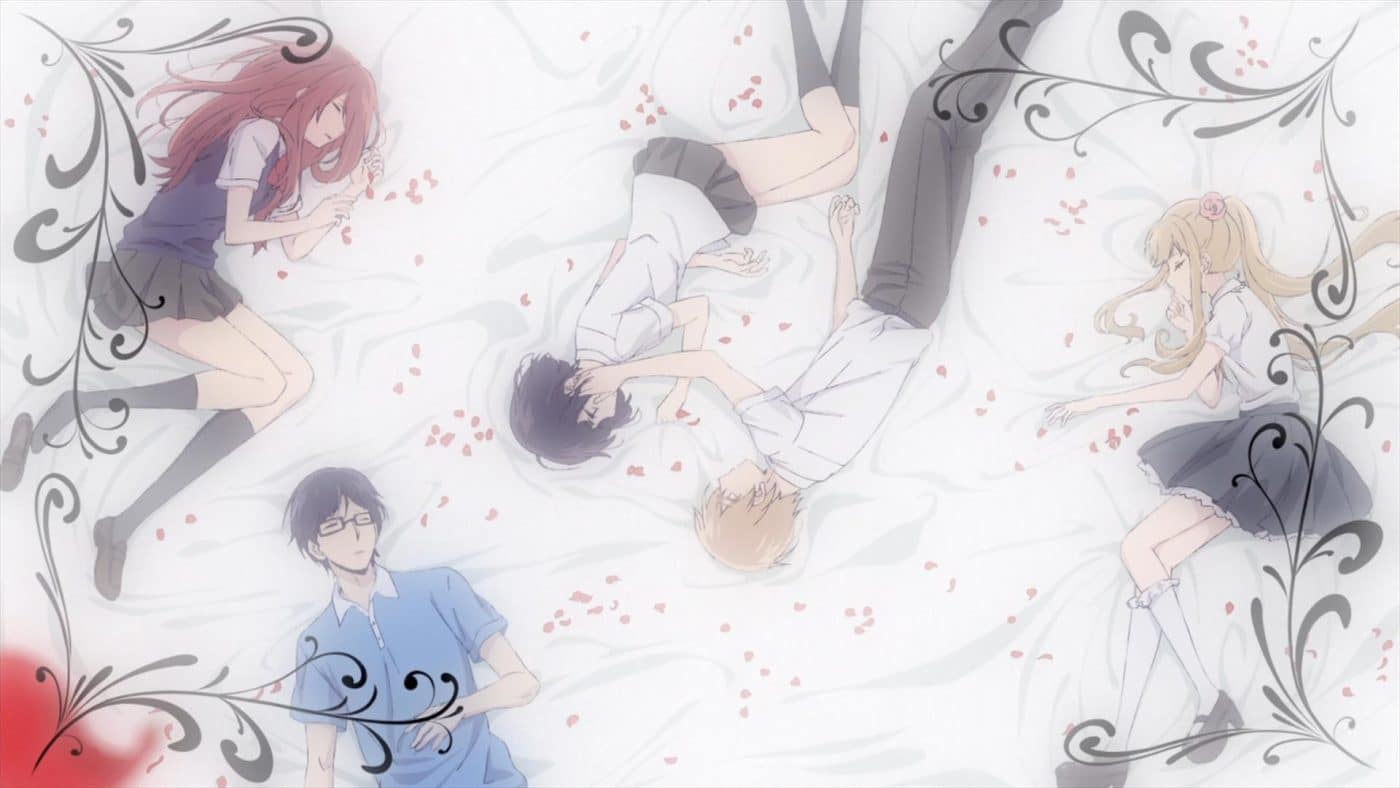 As a series that deals with the sexual exploration of its characters, it should come as no surprise that there are strong sex references here. That being said, these are surprisingly tame in terms of the dialogue. The series rather plays on making a lot of implications, relying on the context and reactions of its situations and characters to convey its meanings to the audience.

The most common one is of course the references to sex itself, whether it be a character who has had sex, plans on having sex, or is having sex. As mentioned above, the spoken references themselves tend to be quite tame. When the scenes come around, unsurprisingly, there is subtle moaning present. These are the most common occurrences.

However, there are a few more explicit references, the most explicit of which is probably where a female character implies that a male character (shall we say?) ‘dirtied’ her uniform. Again, no explicit description is used, but the reference is fairly obvious, nonetheless. Needless to say, the stain itself is never seen, either!

Many episodes feature sex scenes between characters, foreplay, or the aftermath of such events. The scenes lack any detail, with the most explicit sequence depicting a female character’s hand movements as she pleasures another female character. The scene is shown from outside the sheets of a bed, so even these movements are partially obscured.

No thrusting or equivalent is shown throughout as the scenes usually cut before the scenes would go so far.

Some scenes show characters licking others across their bodies and the like, but none are explicit. They merely feature some moaning.

Although bare breasts are seen in some scenes, no nipple detail is shown and only side-views, cleavage and under-views are present. There are no explicit front-views.

Some uses of ‘crap’, ‘damn’, and other mild terms. 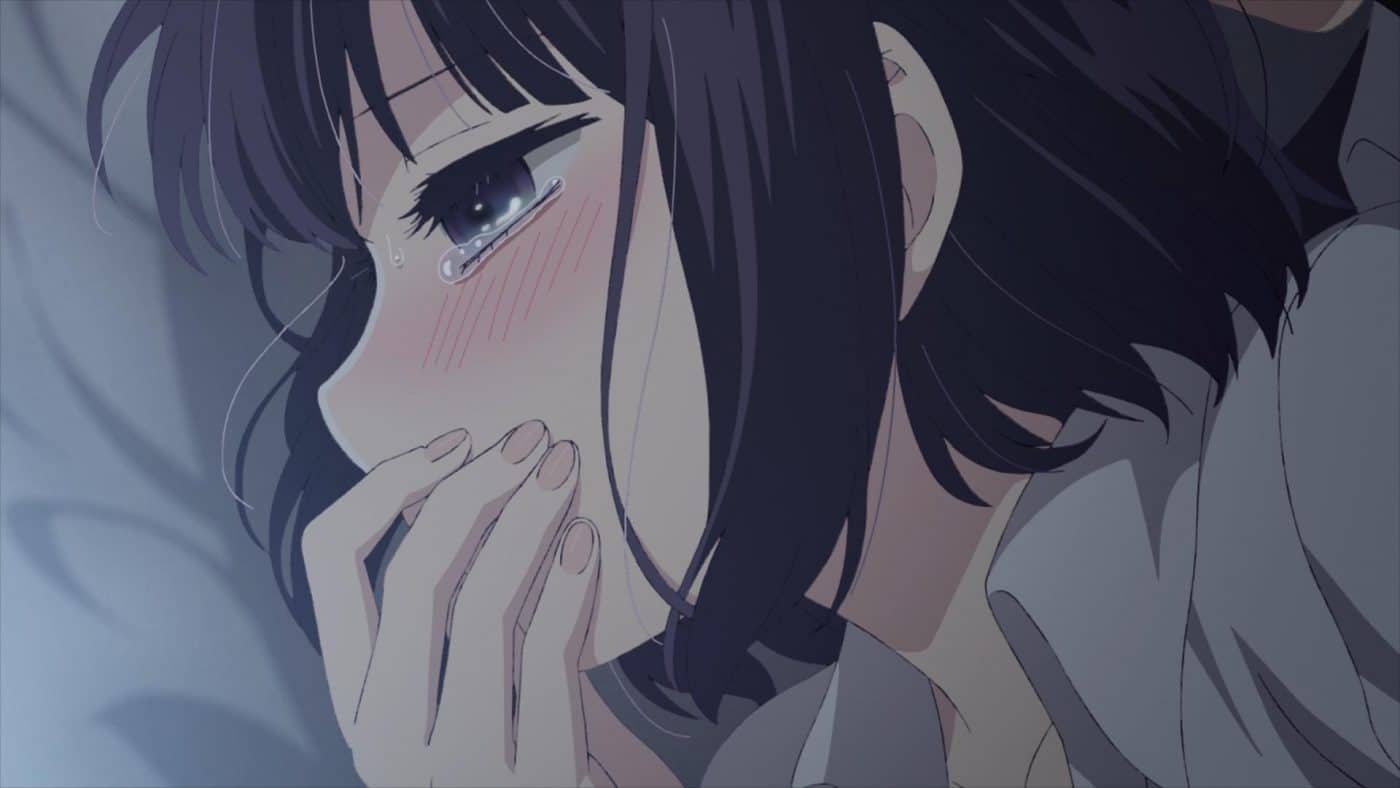 High production values (i.e. excellent artwork and animation) with direction that’s been celebrated for capturing the beauty of the original work without loss of quality or creating a soap-opera-style piece.

A more emotion-powered romance drama filled with duality and realism, featuring a praised emotional music score by composer Masaru Yokayama (works include Your Lie in April and Plastic Memories)

Watching twelve episodes of characters making bad decisions (especially those you may be able to relate to) could be too demanding/torturous for some. The weight of this series could also turn away binge-watchers, who may find it equally difficult to watch more than one episode in each sitting.

For some viewers, the tastefulness of the sex scenes may make certain interactions hard to decipher (e.g. how far a couple actually went). In most shows, this isn’t really that important, but in this one it is; considering the protagonist herself is so cautious with it, it’s important to understand when or if she actually crossed that boundary, since it’s part of her development in the story. In a similar vein, those looking for a more explicit production or approach may be disappointed by the series’ lack of said extreme content.

*Ecchi is anime’s version of softcore pornography. Though sex scenes and even pixilated genitalia can be present, it’s rare (particularly in the genitalia department). It’s much more common for Ecchi anime to contain less explicit detail. In this case, it’s pretty tame.